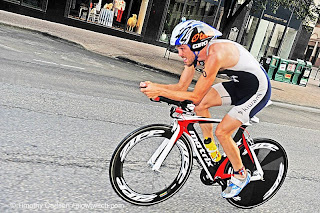 Tell us a little how you got into the sport of triathlon?


I grew up as a competitve swimmer with an eye on the Olympics...that was always the goal.  I swam through high school and went to the University of Nebraska to swim for the Huskers.  After the team was cut due to title 9 and budget issues, I decided to move into triathlons.  I had some mild successes at first, but my big breakthrough came in 2004 when I won the Collegiate National Triathlon Championships.  Since then I have focused on ITU/Olympic (draft-legal) format of triathlon.  I have been fortunate enough to see the world while racing....to date I have raced in 24 countries on 5 continents.


The London Olympic Team for the USA has just been selected (ed. The complete US Olympic Team was finalized after San Diego World Triathlon Series event held on May 14th)?

Qualification through the ITU system is incredibly complex.  It involves chasing points at races of varying levels and point structures to keep your rankings as high as possible. I spent the last 4 years trying to get my ranking as high as possible so I could be eligible for the Olympic Trials race in San Diego.  To keep a long and convuluted story short, I came within 2 places of making it to the start line in San Diego.  We received 7 start spots for the race, and I was ranked 9th.  Triathlon is unique in that only 7 people raced for 2 Olympic spots.  It is probably one of the highest odds of an Olympic Trials in any sport in terms of making an Olympic Team.

What is next for you?


I will continue to race triathlons, but will perhaps change my focus a bit.  I have spent the last 3 years with an extremely narrow focus chasing Olympic Points....now I can choose to do some different and exciting races.  It will be a new challenge, but something I am excited about.  I may continue to race ITU/Olympic Style heading into Rio in 2016, but for now will have fun and race hard!


How have your results been this year?


The first part of the year was all Olympic qualifying races.  I was 20th at the Pan-American Triathlon Championships in Argentina.  I also plaed 5th and 6th in the Piedra Roja and Valaraiso ITU Pan American Cup Triathlons in Chile.


Recently I just won the Kemah Triathlon outside of Houston, Texas.  This was 2nd professional win, so I was pretty happy to do it in a more typical non-drafting Olympic distance format.  Up next is the 5150 Triathlon in Kansas City 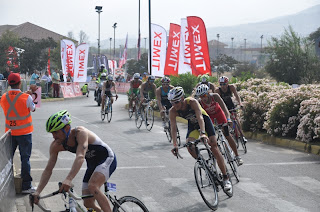 What is one tip you would give to amateurs?


Don't use new equipment on race day!  This goes from race wheels, to saddles, to nutrition....If you haven't used it during training, dont use it during the race.  Now this doesn't mean you have to always use the same equipment in training, but just make sure it is tested and works for you.

I have seen so many people wander through an expo the day before the race and buy new race shoes, get a new bike fit, put on new aerobars, or something else similar only to see their races ruined the next day by this change in equipment.  Keep it simple, and stick to what works!!


Yes, I was living in France at the time, trying to earn ITU points.


Where can people read about your adventures in Triathlon?


They can go to just follow your feet on the internet. or barrettbrandonblogspot.com


This interview was done by William Ironox Pruett for Endurance Racing Report.com


You can go to Coriovelo.com to learn more about triathlon and triathlon coaching.
Posted by IRONOX at 12:23 PM No comments: