This is a report that Ryan Culp sent me as he races around BELGIUM.

Alright well, the races here are all called Kermese (which is a race usually around 60-70 miles in distance but in a 2-3 mile loop. They are usually held within a small town in Belgium.). These races have primes much like American races. These primes sometimes give points or Euros. Sometimes the prime points can reward you at the end of the race with a bike. 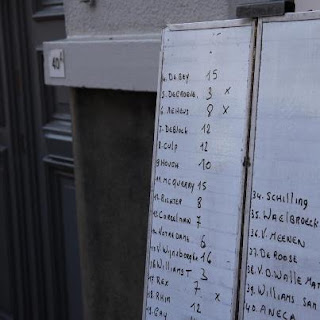 The races here are much different than you may think. The course is easily one of pure skill due to the tight roads and corners that Belgium has. The roads here usually no wider than half a car lane, but you must fit at least 3-4 people across this narrow road. The roads here are smooth, but no different than those in the u.s. quality wise. The one type of road here that is a huge factor in how the race will play out are the cobbles. Cobbles are such a huge obstacle to overcome for a small Texas boy as myself. They force you to push as hard as you can due to the resistance they put on your body but also the unevenness of them. Cobbles are not only hard on your bike but on your body as well. The Belgians though.... Those are a different story. Completely a new playing field. In the states especially Texas in your field you might have a few guys that can actually go in a break or are willing to work or attack.

The rest of the people in your field though are just hanging on for the field sprint at the end. Here, in Belgium, every single man in the field is completely willing and able to make a break as well as put in good efforts. The aggressiveness of them as well adds to the intensity of the races here. To survive in these races I have learned is to constantly move up as well as use my body to push and shove to get to the front. In the states positioning is relatively easy at times. Here when you aren't moving up... You are moving backwards. I have so far done 6 races, and each of these has been a huge learning experience. I have learned that I might be strong and able to go with a break, but if I cannot maneuver myself accurately to the front to maintain good position then I cannot properly utilize my abilities. So far I have placed within the top 30 racers almost every race other than 3 races where I unfortunately crashed in 1, dropped out in another, and then stayed at the back of the pack in the sprint due to being gassed after bridging up to a break on the 2nd to last lap.

Thanks RYAN,, we will look for more updates and stories....KEEP RACING HARD..
Posted by IRONOX at 7:53 AM No comments: