“ Where do I take this pain of mine”  (metallica),  This is one of my mottos for Texas Time Trials, also known as the Tejas 500.  Located in the small town of Glen Rose, Texas.  I have ridden, crewed, coached, volunteered and done all four in one weekend sometimes.  I have filmed the course with my gopro camera, many of you have my video. (that was my promotional plug.). That is my history on the course so here is the review 2012 Ironox version.


This year was the 10th anniversary of the race. Being the special year, I goaded my Ultra triathlete friends in to coming down from Georgia and Illnois.  I said it would be a challenge for them, I didn’t know two of them would win and one of them broke the women’s 12 hour record. 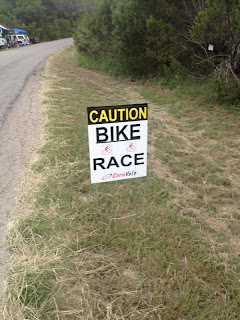 This year, I opted to do a three man relay for the 24 hour and help crew some of the other riders before the 24 hour race. But this short report is about the 500.  The Tejas 500 started with cloudy skies and pretty cool temperatures, it got up in the 80’s on Friday, everybody else can write about the torrential rain for  9 hours straight.  Leading the race from the 48 hour start was  Greg Colvin, who is a beast on the bike. I haven’t met him personally but I talked to his main crew guy for quite awhile. Greg looked good the whole 500 miles. Greg Colvin finished strong and proves to be a formidable force in the future.
But if you start the 48 hour time limit, you risk that the 36 hour riders are going to have an advantage because they know your splits. Which is what happened this year, Jason Overbaugh, a fellow ultra triathlete friend drove from Georgia to do the 500.  Jason and I participated in the Double Ironman in Tampa Florida back in February.  So, Jason, came within 15 minutes of breaking the Tejas 500 course record, but had to ride through torrential rains on part of his ride.  It was fun watching two guys battle the 500 , seeing who was faster on certain laps and always questioning did they go out too fast, cause you know the DRAGON sinks its CLAWS in your quads and back,shoulders and hands at around mile 300.
But, it was even more fun to help Ken Barrow , a randonneur from Houston.  Ken ordered my DVD of the course  (another plug for my course DVD).  Ken hadn’t ridden more than 271 miles at once.  So if you have been around Dan Driscoll, Race director and Super Randonneur, you know you are going to learn a few tips.  So, I searched through my brain and every time Ken would come around,  His crew  Cade Stephens, who did an awesome job.


We would bring out a Driscoll euphism ,
Ex: Just give me one more lap.  Example number 2:  Why aren’t you on your bike.?.  Example #3- We will let you know our decision when you come around again.
These statements and a few change of clothes and some 20 minute rest breaks and a few nutritional tips and Ken Barrow completed the 500 miles successfully.  My other ultra triathlete friend Danielle broke the womens 12 hour upright record in torrential pouring rain, she did 212 miles. 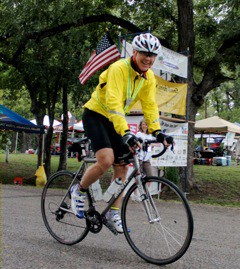 “You feed it once and it stays” (metallica).  This is my favorite saying for ULTRA events, You feed the Ultra desire in your blood.  While you are riding you are always talking to yourself, saying stuff like I am not coming back, or I am going to take up bowling.  But the problem is that you fed the ULTRA monster and it is there to stay.  You start out with the 6 hour and then next year it is the 12 hour and then Pam or Dan , or Vickie or Dex  calls you up and says go for the 24 hour.  Then you take on the 500" the monster".
But just remember,, “Forever Trust in Who You Are and Nothing Else Matters”(metallica).

Posted by IRONOX at 9:19 AM No comments: